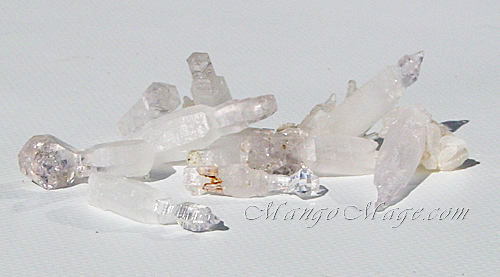 FAIRY WAND QUARTZ
~ Attunement with fairy, devic and angelic realms, relaxation, inner peace, creativity ~
Fairy Wand Quartz is a very unusual type of Quartz crystal found only in Mexico. It is characterized by the wildly varying and intricate growth patterns exhibited on the body and terminations.

Mystic Lore: Intuitive sources say that Fairy Wand Quartz assists in interdimensional travel to the Fairy realm and other higher domains. It is said to facilitate emotional healing, the release of traumatic fixations from the past, including past lives, and the activation and enhancement of creativity, especially in the areas of art and music.