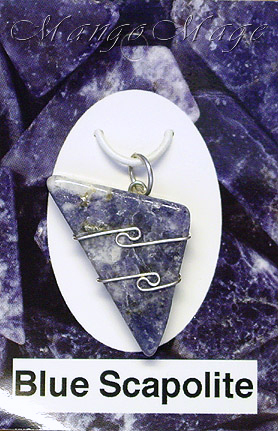 BLUE SCAPOLITE
~ Psychic ability, mental agility ~
Blue Scapolite is a gemstone member of the Scapolite group of complex silicates.  It is found in Quebec, Canada.

Mystic Lore: Intuitive sources say that Blue Scapolite helps to "set one's mind" on a goal and persist until the goal is attained.  It's key
phrase is "strength of purpose" and it is said to assist one in perceiving and accomplishing the evolutionary blueprint which we chose upon entering this life.  It is recommended for releasing old patterns of self-sabotage and embracing the pattern of success.