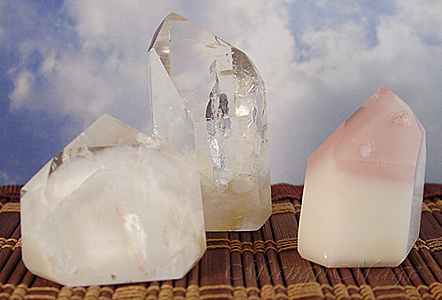 Angel Phantom Quartz
~ Angelic domain, inner peace, Higher Self ~
Angel Phantom Quartz, also known as Amphibole Quartz, is among the most dramatic-looking of the many types of Quartz crystals with inclusions of other minerals.  The Amphibole group includes such minerals as Tremolite, Actinolite, Hornblende, Riebeckite and Richterite.  The abundant white, yellow and red-orange inclusions in Angel Phantom Quartz can consist of one or more of these.

Mystic Lore: Angel Phantoms emanate the soft, sweet, powerful energies of the angelic realm.  These crystals resonate with the higher mind centers, including the third eye and crown chakras.  They aid in overcoming nerve damage and memory disorders, and support dissolving repetitive patterns of worry or fear.  Angel Phantom Quartz facilitates attuning to the Angelic realm, manifesting the Higher Self.